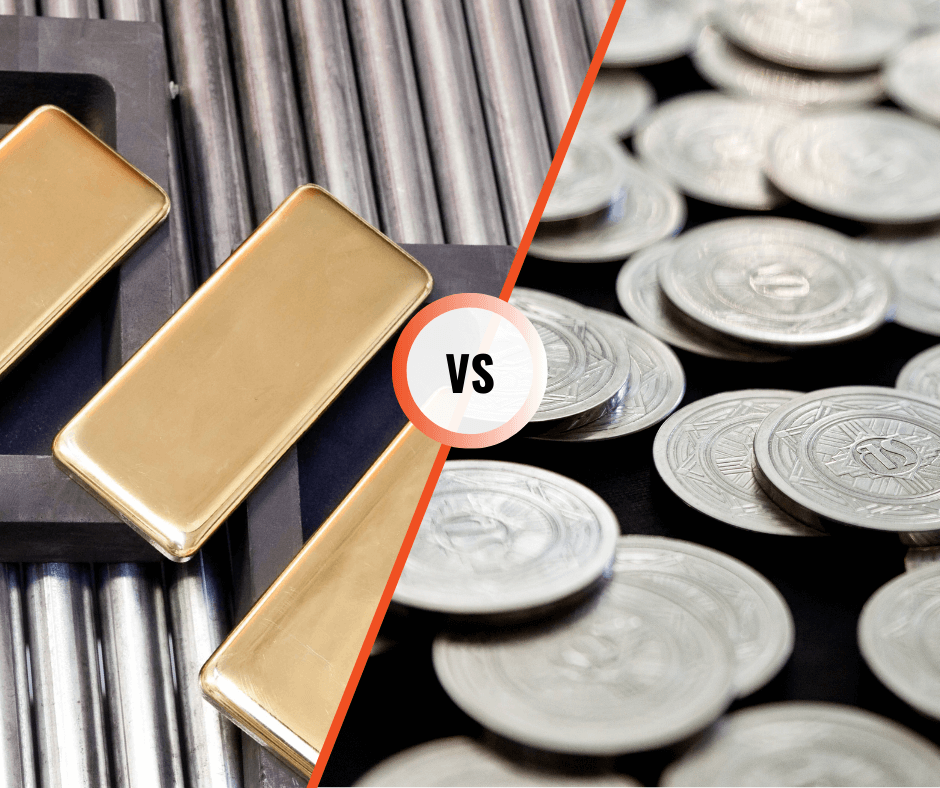 Minting and casting are two different ingots production processes in which industrial automation can bring significant advantages and invaluable automatic process control. But let's see first what their main characteristics are.

They both are production processes aimed at producing precious metal ingots, mainly gold and silver and to a lesser extent platinum group metals (PGMs). But how do they differ?

The English word indicates the action of coining, “to mint”, that is the process that allows, through a succession of mechanical processes, to give the metal the form of ingot or medal (coin). In the precious metals field this type of process is also known as “stamping”.

With minting, the shape of the ingot is determined by the use of appropriately equipped coining presses, which from a sheet of precious metal can, in successive stages, produce a blank (blanks) and then the finished ingot complete with artwork on one or both sides.

The main feature of this type of processing is to allow obtaining an ingot with a very low weight, sometimes even less than a gram.

The ingots produced by the minting process are also characterized by well-defined shapes, with sharp and square contours, which is difficult to obtain through a casting process.

Casting is a production process that consists of transforming the precious metal from its original form (grains, sponge, crystals, etc.) to the form of an ingot of varying weight.

Normally this type of process results in ingots with more rounded shapes than those produced by molding and is rarely used for very low weights.

It is important to keep in mind that ingots produced by casting can have very different aesthetic characteristics and weight accuracy. They can be very variable if the production is done with traditional open cast systems, but very high if they are made with the latest technologies and machinery, such as our induction tunnel furnaces.

What the two production processes have in common, however, is that they lend themselves well to automation.

Given the due distinctions as indicated above, at a certain point of the production phase on both methods can successfully intervene the use of industrial automation both robotized and not robotized. Let's see some examples.

Minting often employs robots with gripping and vision systems that allow the blanks to be loaded into the coining press autonomously and unattended. The same can be done for the unloading of the molded ingots and their subsequent positioning within recovery areas.

In casting, as demonstrated by our Tera Automation T-Line, it is possible to make the entire process automatic, from the granulation phase to the quality control and packaging of each ingot.

Another aspect that minting and casting have in common in terms of automation is that of process data management. Through innovative tools, such as T-Router and Jarvis, data collection can be integrated without any limits, providing operators, technical and financial managers with a series of valuable information that can be used in real time.

Since these solutions are extremely simple in their use but sophisticated in their design, at Tera Automation we also provide our customers with a monitoring and assistance service through the use of devices with augmented reality technology.

Thanks to these new forms of interaction, it becomes extremely easy to carry out step by step the installation, assistance and preventive maintenance phases, which are of inestimable value, especially considering the historical era we are living in which there are great limitations in the mobility of technicians.

Summing up, then, although these are two very different types of ingot production, industrial automation can bring significant advantages in both minting and casting in terms of final quality of the ingot, both from molding and casting, production flow monitoring and trouble shooting.