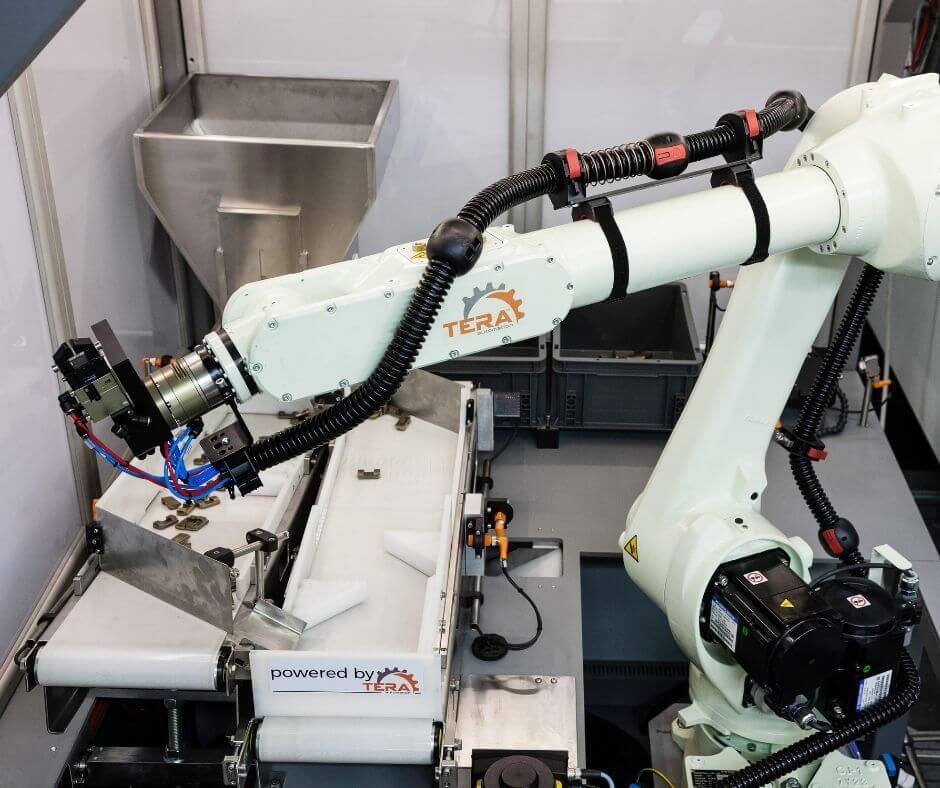 ANTROPOMORPHIC ROBOTS: WHAT ARE THEY AND HOW TO MAKE THE MOST OF THEM?

Antropomorphic robots with six degrees of freedom are the most commonly used industrial robots in industrial robotics solutions, because of their design which guarantees maximum flexibility.

The antropomorphic robot, as suggested by its name, resembles human features, particularly those of the arms. In fact it is no coincidence that this type of industrial robot is often referred to as “arm” in automation language, a very spot on reference.

Just like a human arm, the anthropomorphic robot is indeed characterized by joints and a wrist, that is the end of the robot where the gripping device is applied, comparable to our hand.

This is a type of industrial automation designed to reproduce certain characteristics of human movement, to replace it in its work for certain tasks on assembly lines, in the activity of orienting an object, or it can be programmed to carry out machine tool servicing activities. But these are just some reductive examples of what an anthropomorphic robot is able to do through coordinated movements programmed ad hoc according to the phase of the production line in which it intervenes.

The main features of an antropomorphic robot

The anthropomorphic robot's 6 degrees of freedom of movement make it the perfect solution for applications where object manipulation must be highly variable and obviously precise.

The main features that determine the choice of an anthropomorphic robot are:

-       Payload, which is the capacity at the wrist. This figure tells us the maximum weight of objects that the robot can manipulate.

It is important to keep in mind that this value also includes the weight of the gripping device, which can sometimes be relevant in case the manipulation is intended for bulky objects. This means that if the object to be manipulated is very heavy, the robot will have to be equipped with an adequate gripping mechanism to support it, but consequently it will also have a weight that will affect the reach of the wrist.

-       Reach, or the robot's reach. This value indicates the working area within which the robot is able to operate and is determined in the development of an application project.

Based on the reach, in fact, the system integrator will be able to decide the working stations in interaction with the interlocking system.

This data is also important for the evaluation of the overall dimensions that the automation will have inside the company, also considering the safety distances required by law, which can be managed with physical barriers, more bulky, or laser barriers, much more compact.

What can an antropomorphic robot do?

The tasks that an anthropomorphic robot can carry out are truly many. Some of the most common fields of application and where industrial robotics is widely used are:

From the arm to the brain: the role of the system integrator

If in the recent past the purchase of an anthropomorphic robot was in itself an obstacle due to the price which was not accessible to all companies, today this valuable device is perfectly aligned with the costs of traditional industrial machines.

It must be said, however, that the industrial robot, without proper tooling and programming, will not be able to make any contribution to the production of any company, being comparable to an "engine".

On the contrary, if entrusted to an experienced integrator, the robot will express its full potential and will make available to the user its main strengths, such as:

It is therefore clear that if the anthropomorphic robot is the arm, the brain is the software, and its level of intelligence will depend on the ability of the system integrator to 'educate' it to its maximum potential and in relation to the needs of the company that will install it.