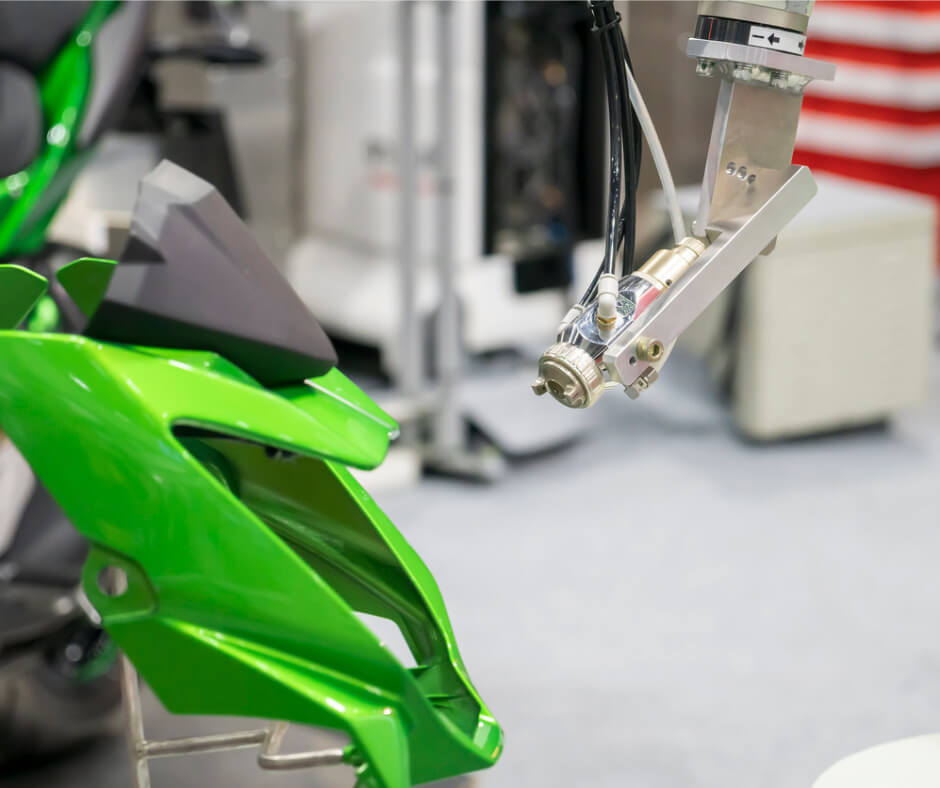 Industrial robotics for the automotive sector

The historical field of application of industrial automation is undoubtedly that of the automotive sector. Only a couple of decades passed from Henry Ford's assembly line to the first welding and painting robots, and even today the production chain of cars and motorcycles enjoys the benefits of these ingenious technological developments

It was not just a turning point in the timing of the production cycle, it was a change, still in progress, towards a higher quality of the finished product, better working conditions and guaranteed repeatability even on millions of pieces.

Today the application of industrial robotics to the automotive sector has greatly expanded. Robots no longer deal "only" with welding and painting - now located in complex lines of numerous robots in parallel - but also with foundry and assembly tasks. Let's see some applications on specific production and assembly lines:

IFR’s numbers speak for themselves: in the 2019 reports with reference to the previous year, the total number of robots and robotic cells installed around the world grew by 6%, reaching more than 422 thousand units. Particularly, in Europe it’s been constantly and significantly growing for the past 6 years, with a +14% in 2018.

Industrial robotics in the automotive field found a steady growth in application overtime. The turning point was spurred by the economic crisis of 2008-2009, a difficult time when car manufacturers had to reinvent production. Thus, from 2013 to 2018 the number of robotic installations in the automotive sector grew by 13% every year, internationally.

These data perfectly reflect the importance of industrial robotics in a sector that will evolve more and more. But let's look at a specific area in particular: the production of components.

The manufacturers of components for the automotive sector have met the same need for renewal experienced by the car manufacturers, but with a few years of delay, i.e. since 2011.

But what tasks are executed by industrial robots in the field we are analyzing? Let’s say infinite. We have seen that the big car manufacturers are now largely robotized: we are not talking about some robotic cells, but about entire assembly processes where robots weld the frames, assemble motors, work on the transmission sub-assemblies.

However, industrial robots can also deal with the manipulation of objects, from small bolts to sheet metal. The latter application is particularly requested by manufacturers of components for vehicle and engine assembly.

Parts of the engine itself, dashboards, handles and thousands of other items that make up our cars can be produced using robotic cells for the enslavement of numerically controlled machine tools.

The automotive sector is a sector that demands high quality standards. The components of a car must be produced in numerous batches with constant quality and many pieces that are always well made can be easily guaranteed by automated robotic systems.

Over time, many Italian companies in the sector have decentralized production sites abroad, where labor has a lower cost. However, for many the negative effects of this choice have been considerable, since often - although not always - the quality level has drastically decreased. The result was a detachment from the buyer, both due to results that no longer conform to standards, and from a moral standpoint, due to the never frowned upon delocalization policy.

The trend observed is that many car manufacturers are increasingly choosing to rely on subcontractor companies that focus on automation and industrial robotics. They prefer smart factories that entrust production, or part of it, to industrial robots. They are so guaranteed:

All these needs are easily satisfied by robotic cells destined for multiple tasks, first of all the recovery machining. It is increasingly easy to understand that 'robotising' a company is a winning choice, because it allows to increase the competitiveness, the orders taken on and the reputation of the company itself in a market with changing needs.

As mentioned above, re-machining is typical of the automotive sector. The robot has the function of placing the blanks in the vice of the CNC machine, where they undergo a first phase of mechanical processing. After that, the robotic arm removes the piece and places it in the next CNC vice so that it undergoes a second series of machining (the 'recovery', in fact).

The phases vary according to the type of semi-finished product and the characteristics of the CNC, but it is certainly possible to carry out all the processes necessary for the completion of the piece in a very short time and with high, constant and repeatable quality standards.

In addition to doing the job faster, the robotic cell:

Thinking back to what has just been said about the demanding requests of car manufacturers, it is even more evident that this is a winning solution for many subcontractors in this sector.