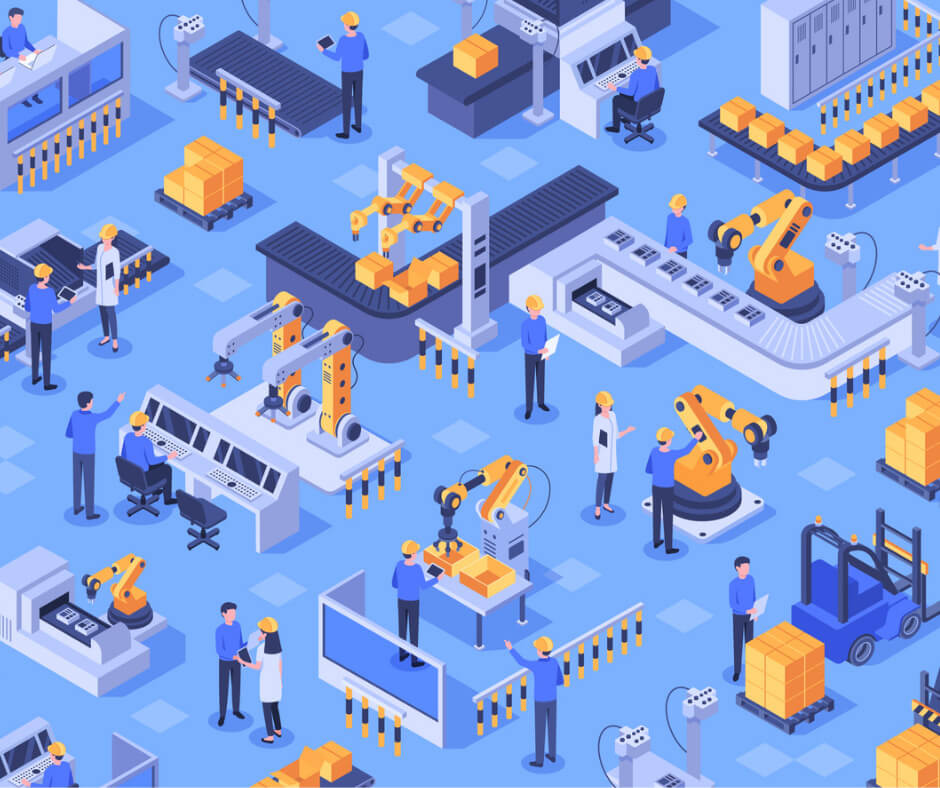 Types of industrial robots: what they are and how to choose them

ISO TR/8373-2.3 norm defines industrial robot as: "automatically controlled, reprogrammable, multipurpose manipulator, programmable in three or more axes, which can be either fixed in place or mobile for use in industrial automation applications".

The very first industrial robot originates in 1959 thanks to the minds of George Devol and Joseph Engelberger and has a weight of approximately two tons, which is definitely too heavy if compared to the ones that are installed on robotic cells today.

The first installation in an industrial line takes place in 1961 at GM Ternstedt in Trenton, NJ. At the end of the 1960’s industrial robots land in Europe as well and a concrete diffusion of this tool began. However, these are steel structures with slow and inaccurate hydraulic motors.

Degrees of freedom and load capacity of the first robots were limited. Their first industrial applications were in the automotive field. As a matter of fact, robots were equipped with welding grippers to weld and assemble car bodies. The first examples of their massive use were those of Nissan in Japan and Fiat (1972) in Italy, where several robots were used to weld the car components - an Italian invention which was later adopted by all automotive industries.

It is therefore clear that despite the obvious initial limitations, the great entrepreneurs of history were able to see the infinite potential of these tools and since then their evolution has never stopped.

In recent years, the various types of industrial robots available in the industrial automation sector have evolved, becoming increasingly compact, efficient and versatile.

In the evolution of industrial robots, an important role was played by some of the brands that invested resources in research and development and that are normally integrated in our automatic lines and robotic islands: KUKA, ABB, Kawasaki, FANUC. Amongst these, shines an all-Italian reality: Comau, which is one of today’s biggest companies in the industrial robotics world.

Alongside these robots, there is another very special category which is that of collaborative robots or Cobots. Cobots are a type of robot designed to work in contact with humans. The best-known model is definitely the ABB Yumi. This kind of robots is often used in the medical/pharmacological field.

To build a Cobot, the manufacturer or robot integrator must comply with a series of specific rules. In fact, Cobots in general can only operate around people at certain speeds, they cannot overheat and must avoid human contact by stopping or changing direction.

In the field of industrial applications, robots can be classified according to 3 levels:

How to choose the right type of industrial robot?

The choice of a certain type of robot so that it is a truly effective industrial automation for your company - is closely linked to many factors. Let's see them together.

Inside this parameter are contained many questions:

That's because each application requires a specific model of robot. Let's take welding, for example: it cannot be done with all types of robots. Usually, you need anthropomorphic robots with certain characteristics.

In many cases, some companies are looking for small-scale automations. Some robots are more suitable for compact applications – such as those that Tera Automation has integrated into its T-Flexicell robotic cells.

Budget is a very important parameter for a company. Each automation can be tailored to the type of application you want to realize respecting the budget constraint. Robots usually have similar prices for the same type of application. Then the different brands can – under certain circumstances – show price fluctuations by providing additional accessories and functionalities.

Some models may be available sooner than others, so you are encouraged to purchase one out of necessity. It all depends on the urgency of the project.

Some models of industrial robots may meet your tastes more than others because, for example, they match by design or colour with the rest of your machines.

A fundamental detail: the system integrator

The choice of the right robot certainly plays a central role in the success of the project.Yet the system integrator may have an even greater importance. And it is important to distinguish between a system integrator and a reseller right away.

System integrators are able to guarantee a complete package including supply of properly configured and equipped machinery, installation, training, maintenance and all-round assistance. They can transfer all their know-how to their customers at any time and guide them in integrating the robot within their company. In addition, they can carry out demo sessions to show first-hand the potential of a robot in a specific application.

Conversely, resellers only supply the device and, in some cases, only the contact of the machine manufacturer and optional accessories. They are not always able to provide direct assistance and make modifications or customizations. Therefore, resellers often only act as intermediaries. Obviously, a valid system integrator offers an enormous added value to the robot, because it allows it to fully exploit its potential in any field of operation.